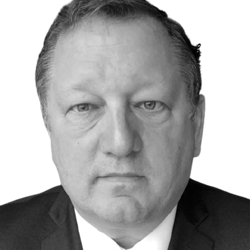 Rear Admiral (Ret.) Brad Williamson is the founder and CEO of Mission, Vision, Strategy, Execution & Analysis (MVSEA, LLC) as well as the Associate Director of the Virginia Digital Shipbuilding Program (VDSP) and Chairman of the Military Affairs Council, Virginia Peninsula Chamber of Commerce.

He has also worked as the Director of Strategic Initiatives for Systems, Planning, and Analysis (SPA) a defense consulting company in Alexandria, VA, and was the Chief Operating Officer/Chief Strategy Officer at ITA International, a defense integrated services provider in Newport News, VA.

A career U.S. Navy surface warfare officer, he has commanded USS Thunderbolt (PC 12), USS Porter (DDG 78), and Destroyer Squadron (DESRON) Two. As a Flag Officer, he served as Chief of Staff, Naval Striking and Support Forces NATO in Lisbon, Portugal, and deployed as the Commander, Standing NATO Maritime Group 2, where he led the largest group of NATO ships ever into the Black Sea at a time of heightened tensions, and also led NATO’s maritime counter-terrorism and anti-piracy operations. His final military assignment was as the 32nd Commandant of the Joint Forces Staff College in Norfolk, VA.

In addition to his Military Affairs Council role, Brad is a Board Member for the Center for American Studies at Christopher Newport University, and on the Board of the Tidewater Area Service Contractors (TASC).
Brad Williamson is a graduate of the United States Naval Academy. He received a Master of Science in National Security Strategy from the National War College in 2001 and has completed Executive Education at the University of Virginia’s Darden School and at Harvard’s John F. Kennedy School.