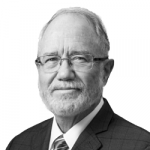 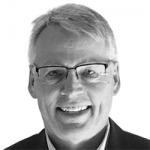 Project managers want projects delivered on time and under budget. Unfortunately, most project managers are handicapped by flawed, or plain wrong, decision-making models for controlling the complexity and variability inherent in project management. The history of project management has been a progression of focus on cost and schedule using ever-newer concepts and computer software. However, the concepts and software have generally been applied in a theoretical vacuum absent the natural realworld relationships between variability, capacity, response time and inventory. Projects are undeniably a special case of production systems and all production systems are governed by operations science. Project managers should apply the concepts of operations science to get predictable and profitable results, rather than ignoring the science because “projects are special.” In this first of a series of articles, we describe a relatively new framework for operations science, initially developed through the award-winning book Factory Physics®, and how it can help completely transform project management from chronically late and over-budget performance into predictable, profitable and career-enhancing work.

An astronaut is able to travel to space (and successfully back to earth) because of the thorough application of many branches of science. Science, in simple terms, is the process of making an observation or a hypothesis about the behavior of nature and then relentlessly testing that observation to see if it holds up as a predictive law. Science is also the knowledge gained through that process. This article will provide a description of project operations science in a way that few project managers have seen. Embracing operations science to manage and control projects will lead directly to better project performance for managers and owners.

There appear to be few applications of the scientific approach in project management. Do a web search on “project management science” and the results are pretty sparse, in both quantity and content. The reason is straightforward: Project managers tend to focus on the coordination and tracking aspects of projects rather than the underlying relationships that drive project performance. This is akin to only tracking speed and route when on a vacation trip without paying attention to the fact that you’re in a VW beetle towing a 38’ camper trailer and heading into the Rocky Mountains—trip progress data gathered from travel through the plains of Kansas will not provide much predictability for the trip through Colorado. If any science is applied in project management, it’s typically directed towards a better understanding of coordination and tracking rather than to the project “physics” that drive project behavior.

Our industry is in crisis. How did we get to this current state of affairs? Ram Shenoy and Todd Zabelle’s previous article on the New Era of Project Delivery discussed this subject in-depth. To briefly recap, project management’s origin in Frederick Taylor’s “scientific management” and worker efficiency (Era 1) was layered over by the PERT/CPM toolset aimed at better tracking and control for more predictable outcomes (Era 2). This combination was then institutionalized with computer technology to handle more complexity faster—though not with much improvement in predictability or profitability.

Failing to understand how project management tools work with, or fail to work with, the underlying science driving project performance is a major reason why so many companies fail at project execution. The prior article elegantly outlined the reasons why different attempts to correct project cost and schedule overruns fail because they don’t account for the scientific relationships between variability, inventory, utilization and response time.

There is a practical science describing the relationships between demand, capacity, inventory, response time and variability—the fundamental elements of any production system or project. It is described in detail in Factory Physics for Managers and in Supply Chain Science or, if you prefer a textbook, Factory Physics. Conceptually, the science is quite simple in its observations about nature and the nature of operations.

The basic science is as follows:

The following image in Figure 1 illustrates the prevalent confusion and practical implications for managing utilization and variability in project environments. This is a compilation of responses when participants at an industry conference were asked to draw the relationship between cycle time, e.g. the time required to install a pipe spool on a project, and utilization: 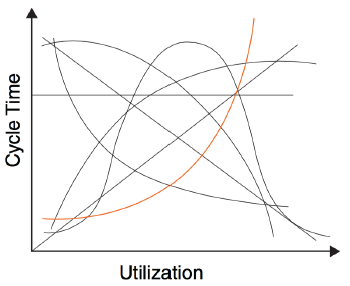 Figure 1: Sample responses to a request to draw the relationship between cycle time and utilization

The orange line indicates the correct response, and a few knew it. Clearly, this is a fundamental relationship that is not widely understood. For a manager to not know this intuitively would be like a homeowner not knowing the relationship between mortgage interest rates and the monthly mortgage payment. The correct relationship, and the equation (the VUT equation) that accurately models the behavior is seen in Figure 2. 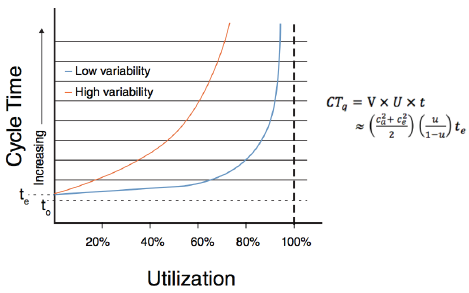 What does this mean to project managers? First of all, PERT charts and Gantt charts are always wrong. They are deterministic (zero variability) representations of project activities and, as such, will always be wrong as soon as, or even before, they are published. Take heart though, these tools still provide much value in determining task sequencing, task dependencies and some rough estimate of task duration. Secondly, pushing resources to work at high levels of utilization is a recipe for disaster, particularly in high variability environments—and what project doesn’t have high degrees of variability? Ever run across a situation where the pipe fitters or the rebar cage fabricators had to be kept busy so they would be ‘efficient’? Because industry struggles to understand the true capacity of a crew, the tendency is to overload it, in an attempt to lower cost. The pipe fitters install pipe and fabricators fabricate cages, whether they are needed today or in three months. In the end, the resource efficiency benefit is exceeded many times over by the cost overruns associated with rework to address design changes or the rework to resequence work because the site is unavailable or covered up by mountains of material. The bottom line
is: There must be some planned buffer of capacity to account for variability if projects are to achieve predictable schedule compliance.

There is a Factory Physics law called “Pay me now or pay me later.” It says that variability will be buffered. More variability requires more buffers. A project manager can choose to buffer project variability proactively or the project buffers will arise on their own, typically as cost overruns, schedule delays, or both.

An important distinction to note is that more variability always means more buffers when synchronizing project resources and schedules but more variability does not mean less profitability or less predictability. Choosing to build oil rigs rather than barns is a conscious decision to accept increased complexity and the associated variability. However, the profitability can be much higher building oil rigs, if properly managed, because revenue and margins are much higher. The key is determining the right combination of response time, capacity and inventory buffers that make the most money. The operations science describing variability and buffers is a powerful analysis and decision making model for successful project management.

If you have plenty of time for trial and error learning and strong leaders, you may be successful at applying PPM practices in your organization. A better path forward is to use the common sense of practical operations science to guide your efforts, accelerate your Project Production Management progress and quickly, predictively implement improvements that fit the unique requirements and challenges that you face.